Curiosities From Paris – An Asian Sphinx At The Louvre

I’ve returned from a two-week vacation in Paris, the cultural center of the world for close to 300 years. I visited a number of museums and photographed a variety of curious artifacts and flat out anomalies from the ancient past that I’ll be posting here in the coming weeks and describing on the podcast.

Paris has a rich history of homegrown artists and craftsman, and at the height of their power (17th Century France), sent out explorers and scientists to discover our planet. They brought back thousands of artifacts and information. The Louvre houses a number of these fascinating artifacts and perhaps other than Cairo and Athens, contains some of the best examples of high art from the Egyptian and Greek cultures.

At the Louvre, the current exhibit of Egyptian art opens with a small rare red granite sphinx which leads you upstairs to a large collection of monoliths and sculptures of idols and figures. As you enter this room you are faced with six distinctive white marble sphinxes. The title of the exhibit (translated from French):

Six of the Sphinxes bordering: Leading to the Serapeum de Saqquara

At first I didn’t notice anything out of the ordinary as I walked by the sculptures, but before I left the exhibit I noticed a large number of Asian people staring and commenting on the sculptures. There were groups of people huddled together, some shaking their heads and talking quietly among themselves.

I stepped back into the room to take a closer look and photograph the heads of each Sphinx, when I noticed something odd. Was it my eyes, or were each of the heads composed with Asian facial characteristics? Wait a minute. This is strange. 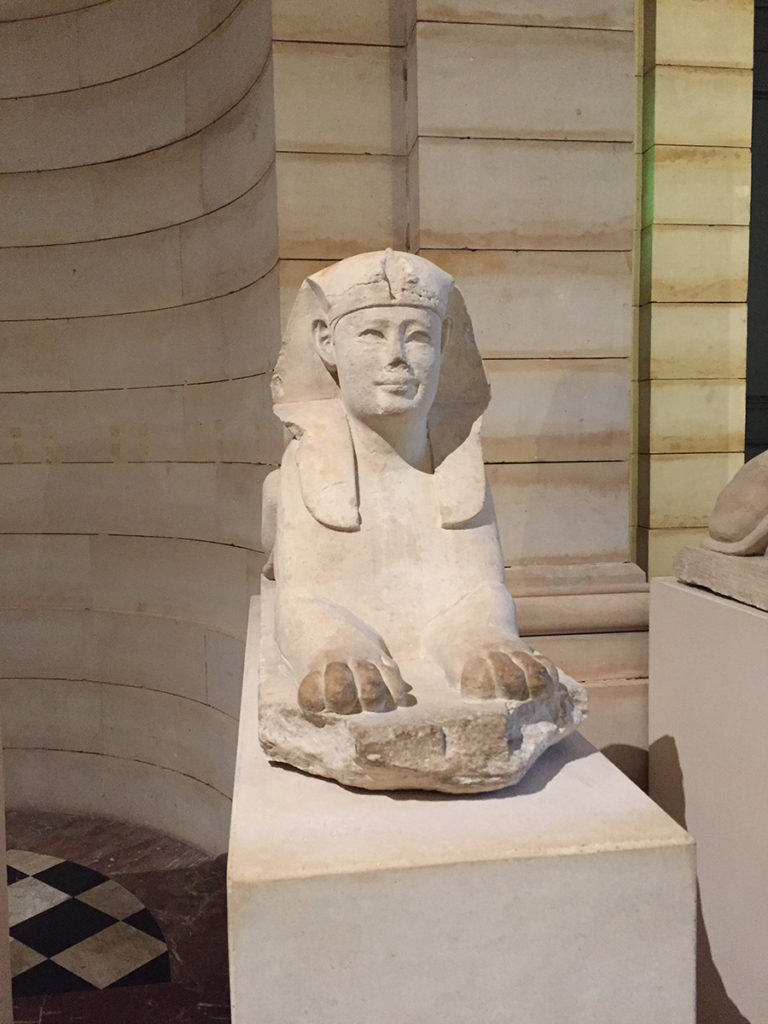 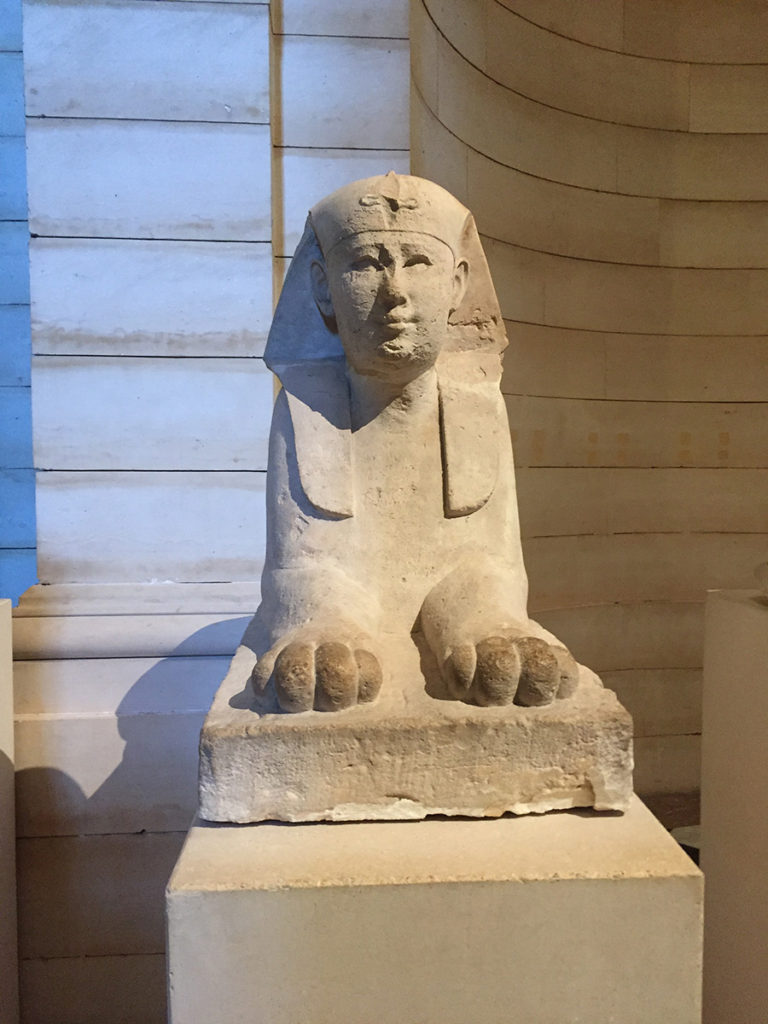 I walked by each figure and all had the same distinctive features. I photographed each and the entire group, letting the sight sink in. Then I realized The Serapeum of Saqqara was discovered in 1850 by August Mariette, a French archeologist who excavated the site for a few years.

These six small sphinxes were one of the 600 that were discovered in the area during the excavation. Were they part of an Asian community that had ventured to the Middle East thousands of years ago, that have not been known about until recently? We can only surmise that ancient Egypt was far more culturally diverse that originally described.

I’ve seen a rich Asiatic influence in Central America among the Maya, Olmec, Aztec and other native people during all phases of these cultures. By the way, this is never discussed by conventional archeologist or anthropologists (strange.) This may be the case in Dynastic Egypt – but because we know so little about the culture diversity of the environment, we are led to guess.

I was as shocked as the rest of the groups that were staring at this unusual spectacle and wondering where in the historical past Asian consultants, Pharaohs or travelers were described and what may have been their influence? Ancient history is a mystery.

The Serapeum of Saqqara is a serapeum located north west of the Pyramid of Djoser at Saqqara, a necropolis near Memphis in Lower Egypt. It was a burial place of Apis bulls, which were incarnations of the deity Ptah. It was believed that the bulls became immortal after death as Osiris Apis, a name shortened to Serapis in the Hellenic period.

The most ancient burials found at this site date back to the reign of Amenhotep III, the ninth pharaoh of the eighteenth dynasty during the 1350s B.C.

Working as an administrator during the reign of his father, Khaemweset, a son of Ramesses II (1279–1213 B.C.) of the nineteenth dynasty, ordered that a tunnel be excavated through one of the mountains at the site and designed with side chambers to contain large granite sarcophagi weighing up to 70 tonnes each, to hold the mummified remains of the bulls. A second tunnel, approximately 350 m in length, 5 m tall and 3 m wide (1,148.3×16.4×9.8 ft), was excavated under Psamtik I (664 – 610 B.C.) of the twenty-sixth dynasty and later used by the Ptolemaic dynasty.

The long boulevard leading to the ceremonial site, flanked by 600 sphinxes, likely was built under Nectanebo I, (379/8–361/0 B.C.) the founder of the thirtieth dynasty (the last native one).

The Serepeum is a curiosity to many alternative research investigators. The explanation given for the creation of the massive bull sarcophagi is questionable as no remains or evidence of bulls has ever been discovered. What is highly anomalous is how the massive granite sarcophagi were created and by what means. A number of tool and construction engineers have commented on the sheer perfection each of these boxes maintains. Noted tool expert, Chris Dunn has actually measured the interior and exterior of these boxes and concluded that they were created with power tool (machined cutting and polishing devices.) 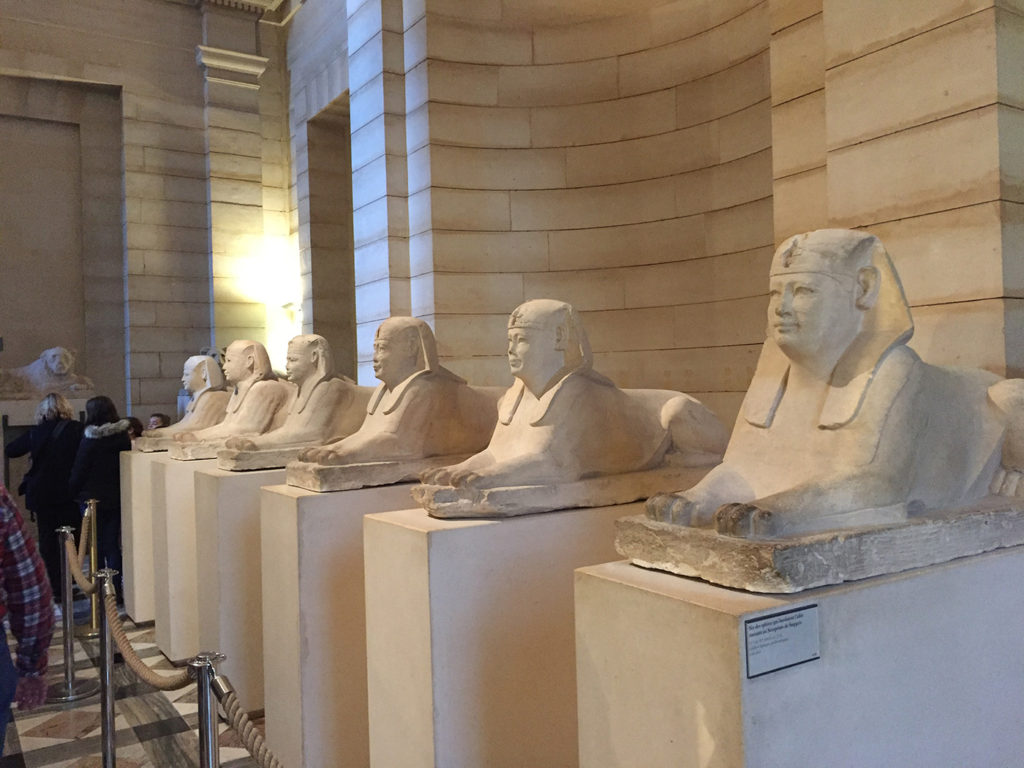