Spirit Journey Into The Orion Zone 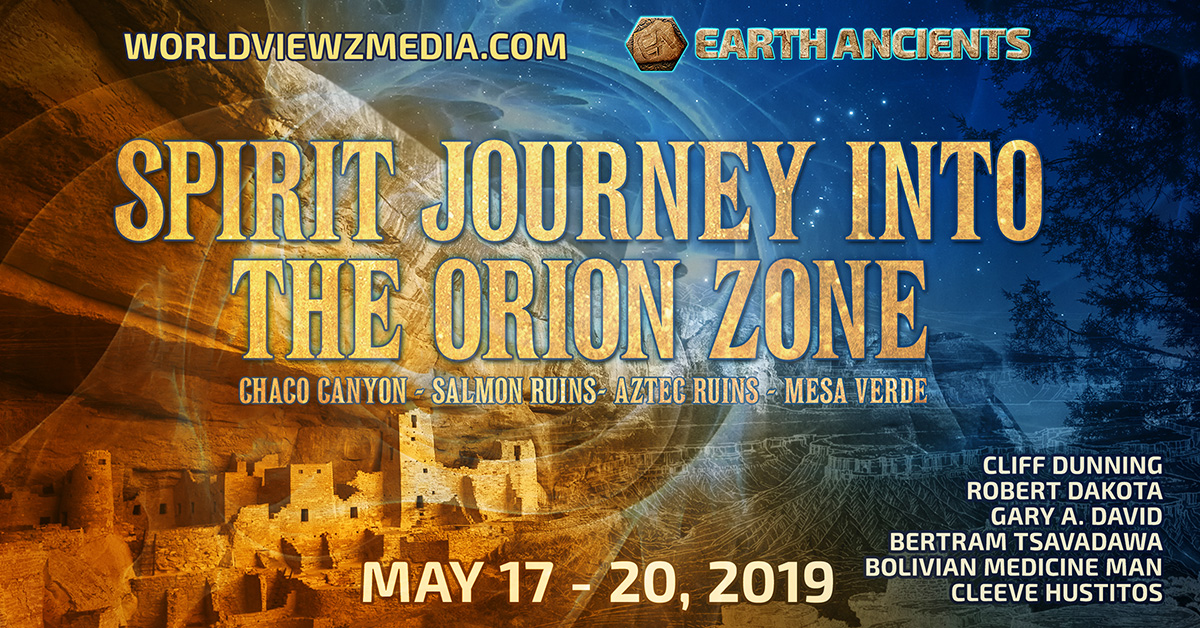 Spirit Journey Into The Orion Zone

Join us for a sacred journey to the Orion Zone where the heavens are reflecting in settlements on the earth. The ancients peoples built monumental structures and complexes that rival the engineering feats of Egypt.  As above, so below. These great kivas and monumental structures are harmonized to the cycles of the sun.

World ViewZ Media, along with Cliff Dunning, invite you to experience a journey that goes beyond the basic tourist travel and provides an opportunity to connect with the people, culture,  and spirituality of the ancient Americas. Each day before entering the sites our Bolivian medicine man will energetically cleanse everyone and we will together create ceremony to remember the ancestors and Mother Earth in gratitude. The four corners region of the southwest has been an ancient crossroads for the Americas and they were all connected in the past.

We will be joined by Hopi guide Bertram Tsavadawa from the corn clan of old Orabai and Bolivian medicine man (an intuitive energy healer) will be the spiritual guides also though out the journey. They were both with us on the last journey to Chaco.

On this adventure, you’ll connect with nature spirits, the Cosmos and the energies of the ancient Pueblo people of the southwest region in North America. We’ll be aligning our hearts to the signature of the planet so that you may be joyfully lifted as the Earth lifts in her awakening. Come ready to cleanse, renew and align yourself with the sacred traditions of the ancients, while opening the path to greater enlightenment and balance.

May 16th & 20th, 2019 arrive in Albuquerque and check into Best Western hotel by 3pm there is a free shuttle from the airport. Pillowtop Bed, Microwave And Refrigerator, Non-Smoking, Coffee And Tea, Wi-Fi, Full Breakfast.

Check into hotel by 3pm Greet & Meet 5pm-7pm for opening meditation, ceremony and talk from our guides.

DAY 1 Depart for Chaco Canyon depart 6am Fri. May 17th

Arriving Chaco Canyon visitor approximately by 7:30am we will be energetically cleansed before entering ancient sites. We will explore the great Kivas of Casa Riconada & Pueblo Bonito. As well as other monumental structures and petroglyphs. Returning that evening by 4pm to get cleaned up for dinner and evening discussion. Evening discussion 7-8:30pm. Organic picnic lunch at the visitor center. Dinner on your own. We will begin the morning with a mediation and energetic cleansing at 7am. Depart 8am for Mesa Verde we will spend all day exploring the ruins and petroglyphs at Mesa Verde. Discussions and lectures along the way. Organic picnic lunch 12 pm. Depart 4:30pm for Bloomfield arriving approximately by 6pm Free evening. Dinner on your own. We will begin the morning mediation and energetic cleansing on site at Chaco Canyon 8-9am. Exploring the sites further with optional hike to cliffs above the Pueblo Bonita ruins. There are so many sites to see here that last time we were wishing for one more day. Organic picnic lunch 12:30pm. 1:30pm – 4:30 pm more exploring, lecture filming photography. Depart for Albuquerque to hotel and Farewell Dinner included. BONUS! SAVE! BOOK EARLIEST BIRD AND SAVE.

Tour – Land Only Costs Per Person, single room occupancy:  additional $350 NOTE: The Single Room Supplement applies for those who would like to secure a private room throughout the tour.

ROOMMATES: We will be happy to try to find a suitable roommate for those who are traveling alone and would like to share a room. Per our Terms and Conditions, registration for the tour will be held open until four weeks before the departure date in order to try to match everyone with a roommate. If, by that date, we have not been able to match you with a suitable roommate, you will be responsible to pay for the single supplement. An early registration will facilitate this process.

Deposit Schedule: Deposit Payment – due as soon as possible in order to ensure a place on the tour
Per Person Double or Single accommodations: $500 deposit.

Please read the Terms and Conditions of this journey.

To reserve your place Book Now!

Cliff Dunning is the host and producer of the popular podcast, Earth Ancients: Startling New Discoveries from Our Planets Distant Past. A writer, his articles appear in publications around the world. 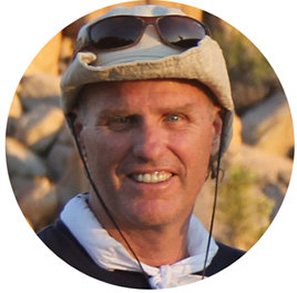 Robert Dakota is a producer of journeys, events, seminars, and films about authentic healers, nature traditions, sacred sites, and Mother Earth. He has been interested in ancient cultures from age 16 until the present day where he has been exploring ancient cultures and spiritual traditions ever since. 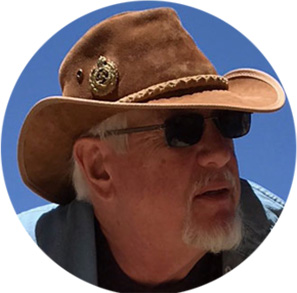 Gary A. David earned a master’s degree in English literature from the University of Colorado, and he is a former college professor. He is also a poet, with numerous volumes published, and a professional guitarist/vocalist.

His articles or interviews have appeared in many magazines, including: Ancient American, Ancient Mysteries and Advanced Archaeology Review, Atlantis Rising, Fate, Fenix (Italy),  Heretic, Mindscape, Erich von Däniken’s Sagenhafte Zeiten (“Legendary Times”), UFO, and World Explorer. His work has also been featured in both of the Graham Hancock Readers and in Underground! The Disinformation Guide to Ancient Civilizations, Astonishing Archaeology and Hidden History.

Gary continues to give presentations, including: Ancient Mysteries International Conferences (AMI), Conference for Precession and Ancient Knowledge (CPAK), Verde Valley Archaeology Society, many branches of Mutual UFO Network (MUFON), and the “Wise Guys” Conferences—Cosmic Origins, Sedona, Arizona. He has given international radio interviews, including Coast to Coast AM with George Noory, Whitley Strieber’s Dreamland, Jeff Rense, Earth Ancients with Cliff Dunning, Paracast with Gene Steinberg and Christopher O’Brien, Den of Lore with Chris George Zuger, and many others. He recently appeared on the History Channel’s TV series: Ancient Aliens, Brad Meltzer’s Decoded, The Coming Apocalypse, as well as on French, Russian, and Japanese TV programs.

Gary is an author and independent researcher who has studied Southwestern archaeological ruins and rock art for nearly thirty years. His books about the Hopi and other ancestral Pueblo cultures of Arizona and New Mexico include:

·      Star Shrines and Earthworks of the Desert Southwest.

·      Mirrors of Orion (subtitled Star Knowledge of the Ancient World) 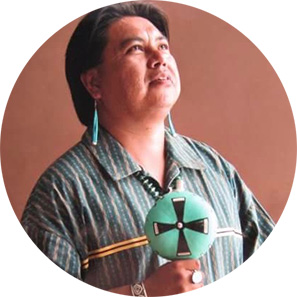 A special Hopi cultural guide, Bertram Tsavadawa, Ph.d., of Ancient Pathway Tours–whose ancestors are from the Old Oraibi and Corn Clan–will share Hopi stories of meaning, take us to view ancient petroglyphs, and teach about the culture and spiritual meaning of the past and present Hopi Nation. 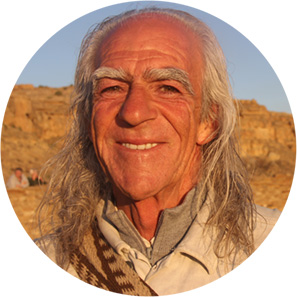 Our special guest from Bolivia is an Intuitive Energy Healer who has lived and trained with medicine peoples of the Andes for the last 15 years and he spent 15 years previously studying with Tibetan buddhists. He is our special guest who will accompany and prepare us energetically for each day. He will bring the knowledge of the Andes that has much in common with the cultures of the north. 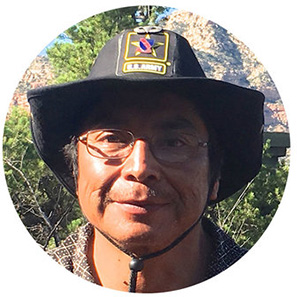 Special guest speaker opening night. Cleeve Hustitos, 82nd airborne veteran as an aviation mechanic, is also a Zuni Master carver of both fetishes and kachinas. His pieces are more then just art they are medicine. Member of the Badger Clan. Cleeve will introduce you to the ancient world of the southwest pueblo people and bless the start of this journey.

To reserve your place Book Now!